Roger Synenberg concentrates his practice in criminal trials, appeals, and civil litigation. Roger has tried over 100 cases, including numerous white collar crime and conspiracy trials. He has briefed, argued, and won cases in United States Circuit Courts of Appeals and the Ohio Supreme Court.

Roger is a former Assistant United States Attorney for the Northern District of Ohio. Since 1985, Roger has specialized in criminal defense and civil litigation and has tried cases in state and federal courts throughout the United States.

Roger is a Fellow of the American College of Trial Lawyers, a Fellow of the American Board of Criminal Lawyers and a Fellow of the International Society of Barristers. These three organizations are by invitation only, for lawyers who have demonstrated the very highest standards of trial advocacy, ethical conduct, integrity and professionalism. Roger earned an AV Preeminent rating by Martindale-Hubbell. He has been recognized every year since 2005 as an Ohio Super Lawyer for his White Collar criminal defense practice and has been rated in the highest Band classification for his criminal defense work in the prestigious Chambers USA Guide, America’s Leading Lawyers for Business. In 2014, Roger received the prestigious John P. Butler Lifetime Achievement Award from the Cuyahoga Criminal Defense Lawyers Association.

Roger Synenberg is esteemed for his substantial experience handling criminal defense and civil litigation at state and federal levels. He is particularly noted for his expertise in healthcare and securities fraud disputes. Impressed commentators report: “He is a great trial lawyer, very good on his feet, a quick thinker and very tenacious.” – Chambers and Partners, Band 1

Roger’s list of high profile cases include representing a stock broker accused of misappropriating over $150 million, a financial planner accused of bribing the Chief Financial Officer of the Ohio Bureau of Worker’s Compensation, a judge, a state senator, and the defendant in the first federal death penalty case in the Northern District of Ohio in over twenty-five years.

Mr. Synenberg’s civil practice has included representation of Cleveland State University and several, well-known, privately held businesses in the Northeastern Ohio area. He is presently Special Counsel to the Attorney General for the State of Ohio.

For decades and through hundreds of cases, Mr. Synenberg has employed his knowledge and experience to assist clients through some of the darkest days they may encounter. Whether they face charges in state or federal court, those accused of crimes know that when the stakes are high they want an attorney with a proven record who will represent them zealously. Mr. Synenberg offers that commitment, no matter how simple or complex the case may be.

Active in his community, Roger served fifteen years on the Cuyahoga County Board of Elections, serving eight years as Chairman.

In 2004, Roger and his wife Joan founded Synenberg & Synenberg, LLC. Shortly after that association began, Governor Bob Taft appointed Joan to become a Cleveland Municipal Court Judge. Joan continues to serve as a Cuyahoga County Common Pleas Judge. Roger and Joan live in Cleveland, Ohio. He is the father of two boys, Eric, who is a member of the firm, and Reid, who lives and works in California. 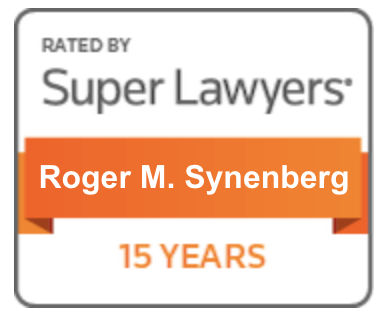 Roger’s list of high profile cases include representing a stock broker accused of misappropriating over $150 million, a financial planner accused of bribing the Chief Financial Officer of the Ohio Bureau of Worker’s Compensation, a judge, a state senator, and the defendant in the first federal death penalty case in the Northern District of Ohio in over twenty-five years.